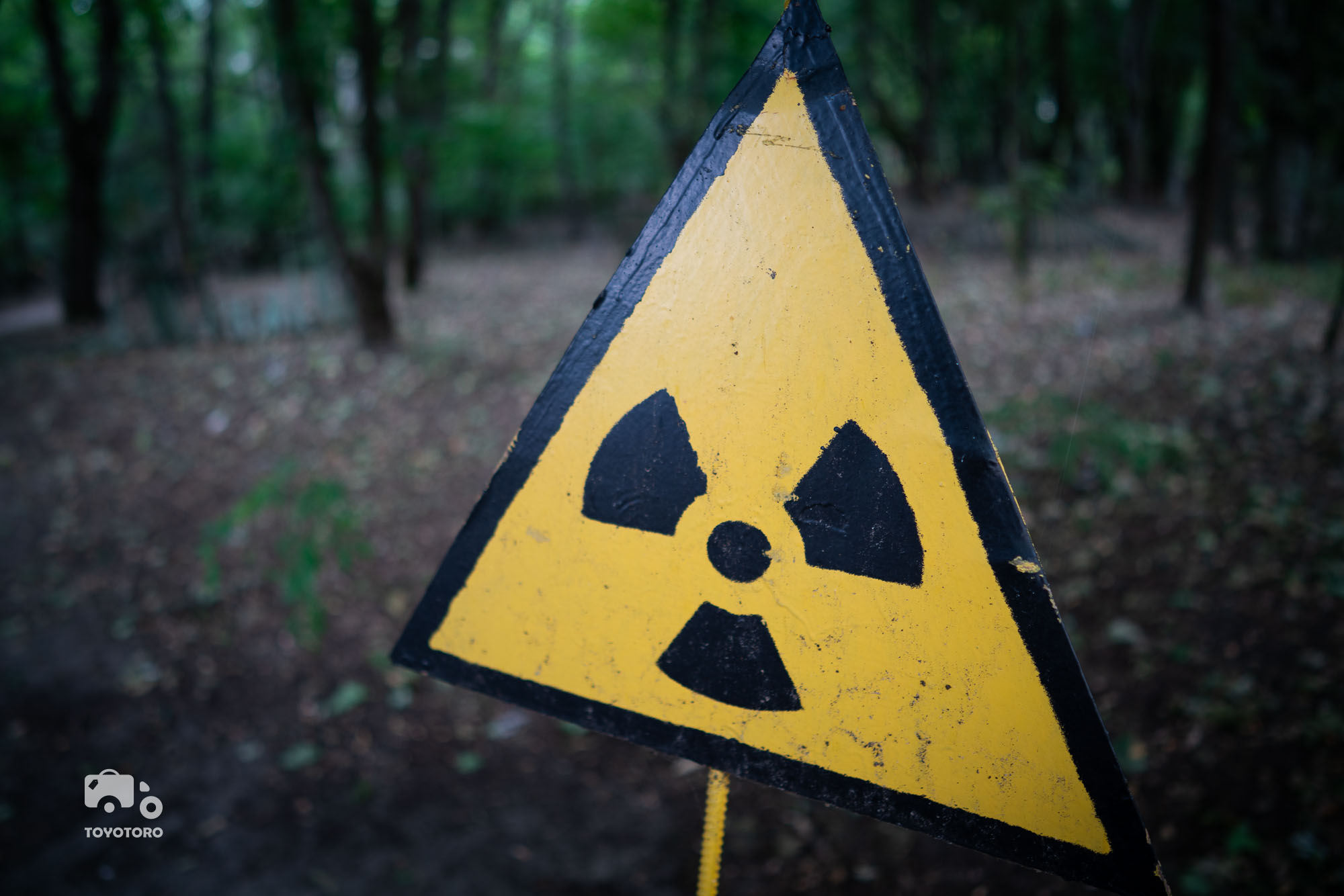 A theme park for the dead

Little Henning was only four years old when a cloud charged with radioactive isotopes moved from the Chernobyl Nuclear Power Plant, near the now-abandoned town of Pripyat, to Western Europe. I would not have enjoyed being told that I could not eat certain foods such as mushrooms and dairy products, like Henning was. His memory, although vague, was full of apprehension, or should I say the look of fear in his mother’s face when he gazed up at her. I imagine so, but since I wasn’t there I can’t say for certain. Even years after the incident of 1986, German citizens were warned against the contamination of certain foods but poorly informed, people took matters into their own hands. Some funded radiation measuring device, while others, like Henning’s mother joined Eltern fuer unbelastete Nahrung, a club mostly ran by mothers, where its members published reports on the radiation level of different foods for their community. 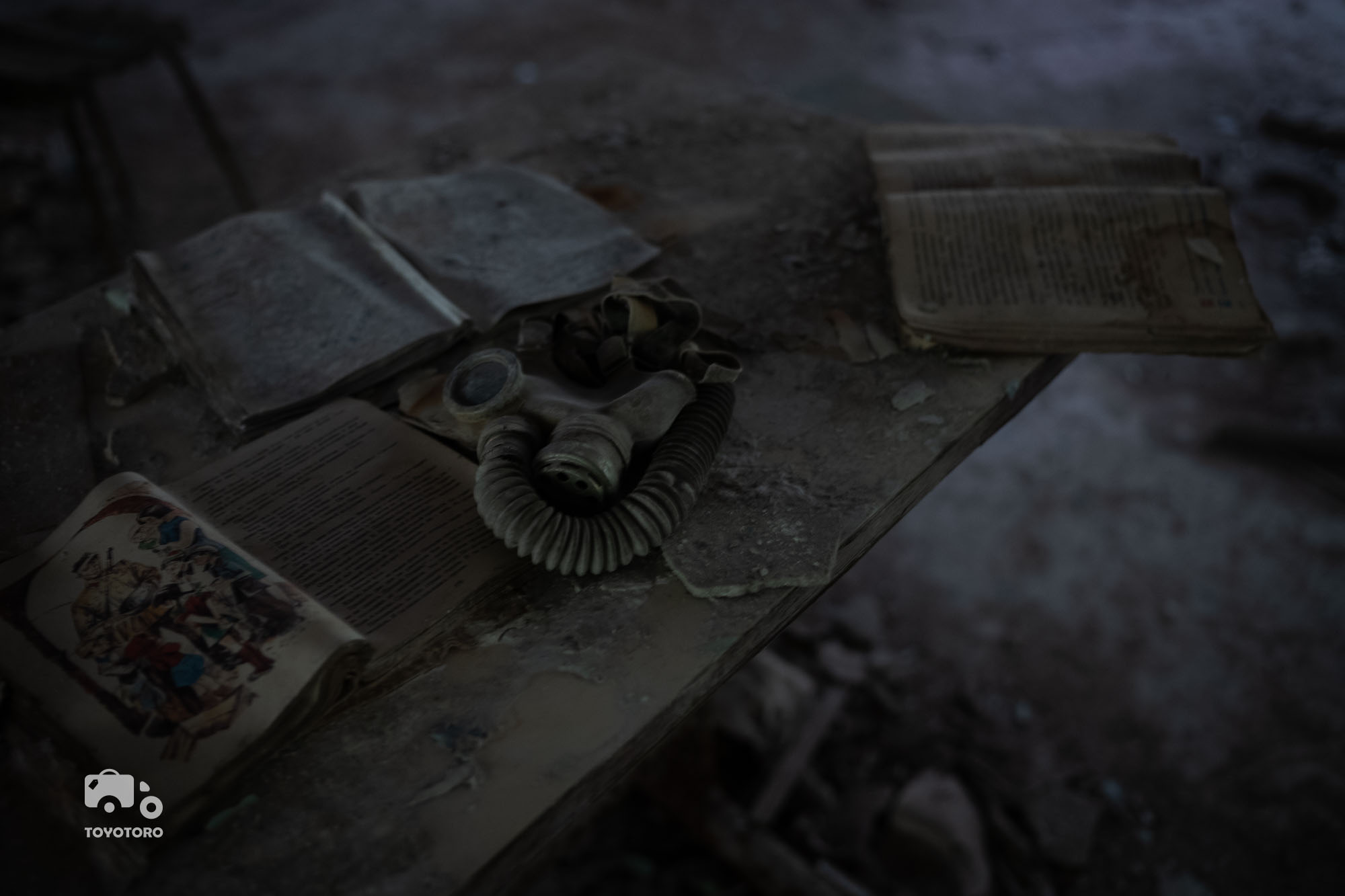 An enemy that one cannot see with the naked eye is surely hard to fight against.

An enemy that one cannot see with the naked eye is surely hard to fight against and sometimes it’s just easier to simply not believe it, which was the reaction to some EU countries at the time. This concern for what parents can feed their children, so that in five, ten or twenty years they don’t grow up to realise they have cancer; in combination with outright confusion, due to lack of information from any former institution is still deeply ingrained in the minds of that generation. It is no wonder then, the now not-so-little Henning, did not tell his mother before we paid a visit to the source of the disaster 32 years after the incident. 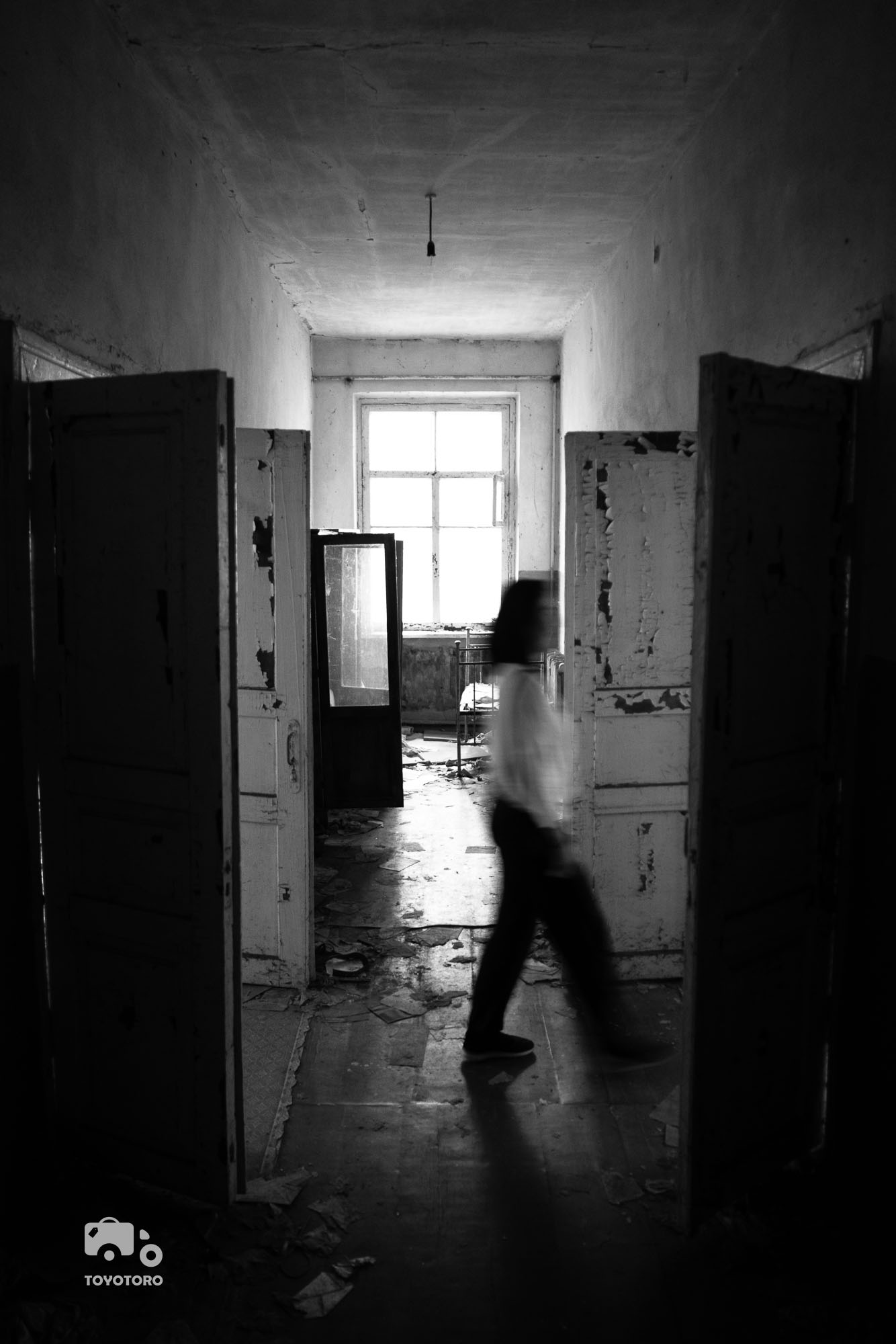 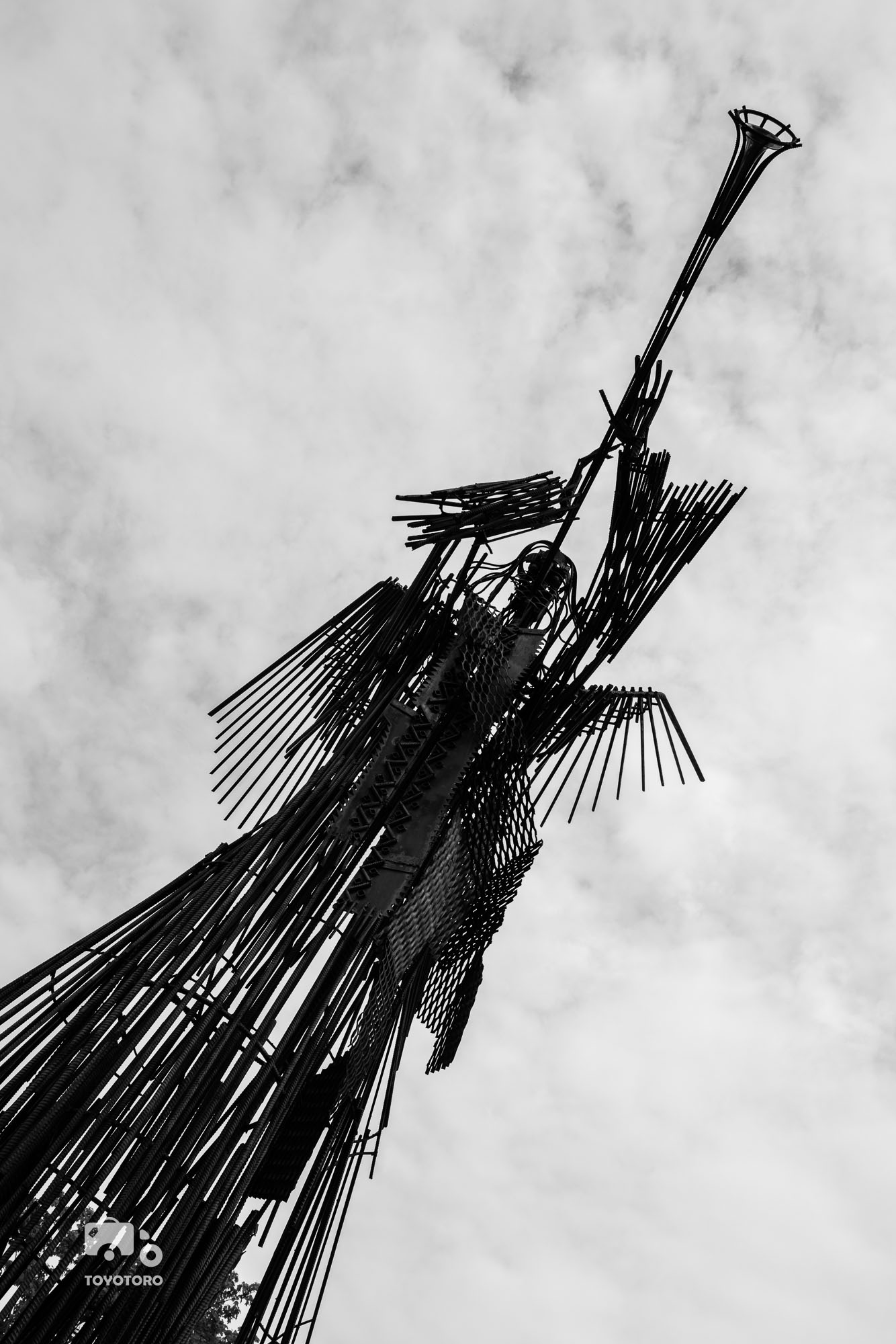 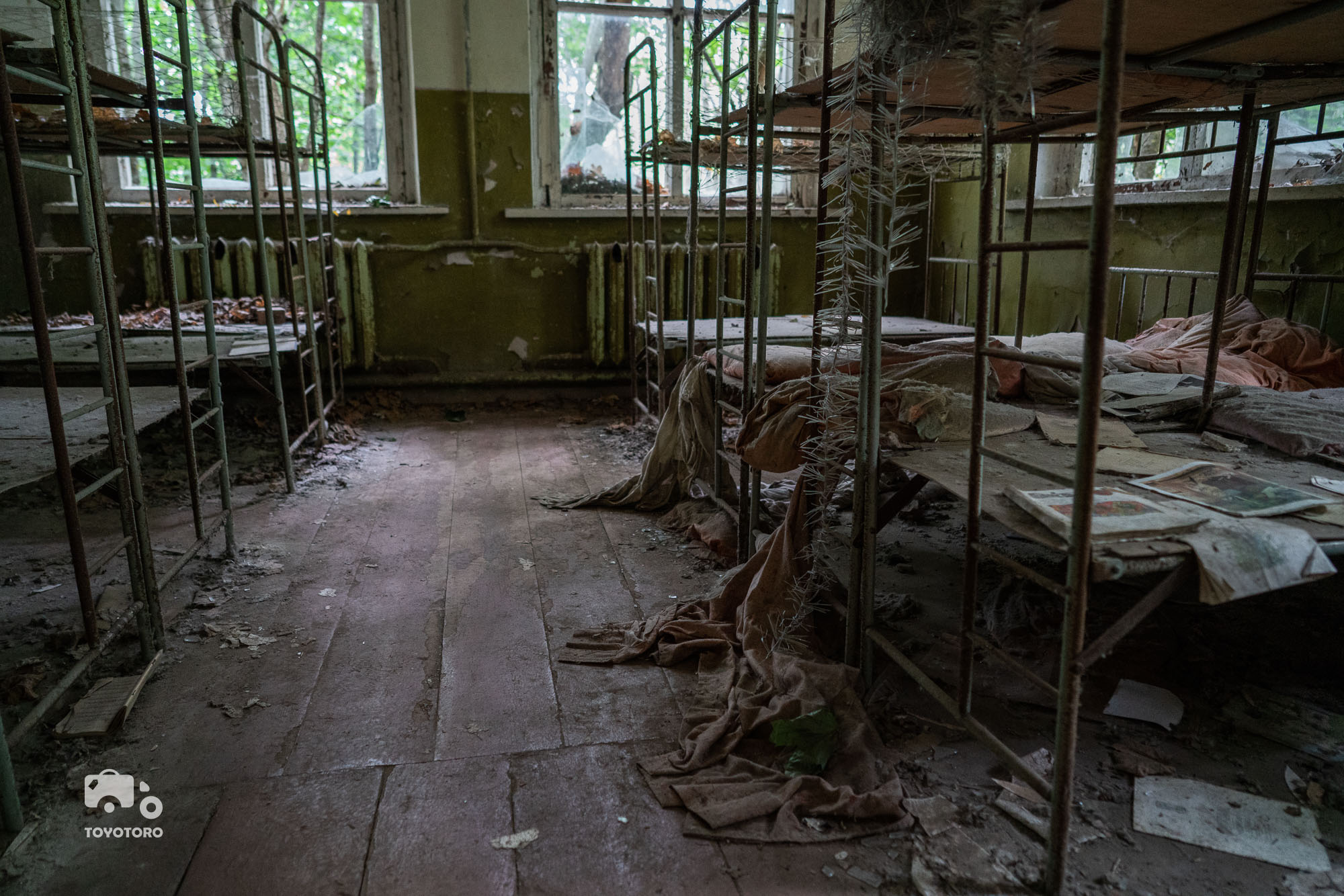 As advised by our guide the day before, we wore closed shoes, long sleeved tops and bottoms and with our hired Geiger-counter we were radiation combat ready. Plus, the night before we had binged on Chernobyl documentaries so we touched-up on our radiation protection education. One of the documentaries explained, which I thought was the best description by far, going to Chernobyl now is to imagine radioactive particles as fresh paint. If you touch anything with your hands or step on the grounds or rub your hair in the trees it will stick to you, which is why we were advised not to touch anything nor stir the dirt on the ground too much.

Going to Chernobyl now is to imagine radioactive particles as fresh paint.

Of course, this simile does not work for the period before the huge clean-up operations because radiation level was so high that it penetrated human tissues and breached heavy-duty machineries so they malfunctioned. Everything had to be ‘cleaned’ which meant vegetation was cut down, almost everything in any building was thrown out and destroyed before it was all buried. In addition, over the no. 4 reactor, that exploded, a huge metal and concrete sarcophagus with a height of 105 metres and spanning 257 metres was erected to prevent further radiation leakage. All that human effort and bravery so that we tourists can take a glimpse of its aftermath. 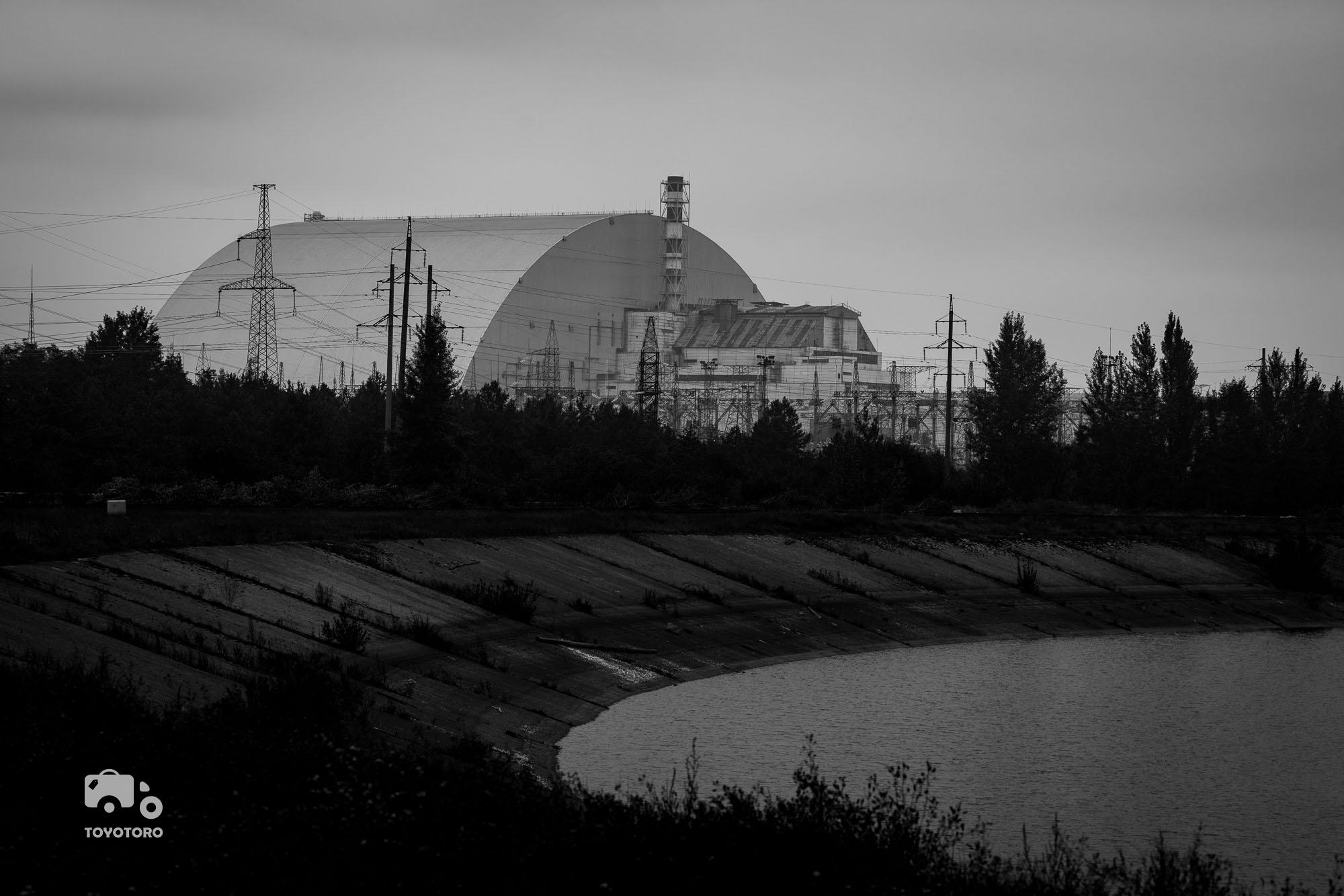 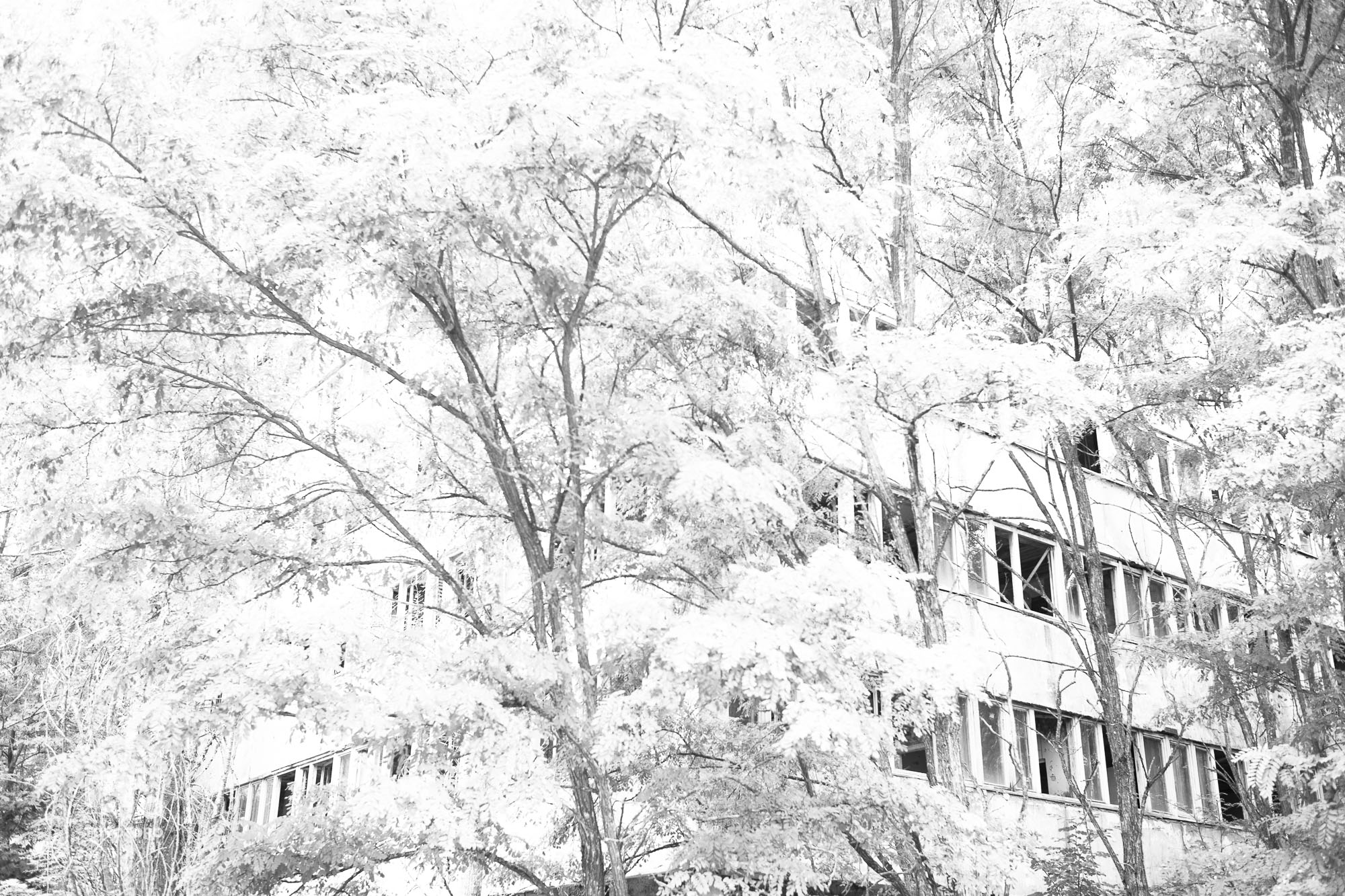 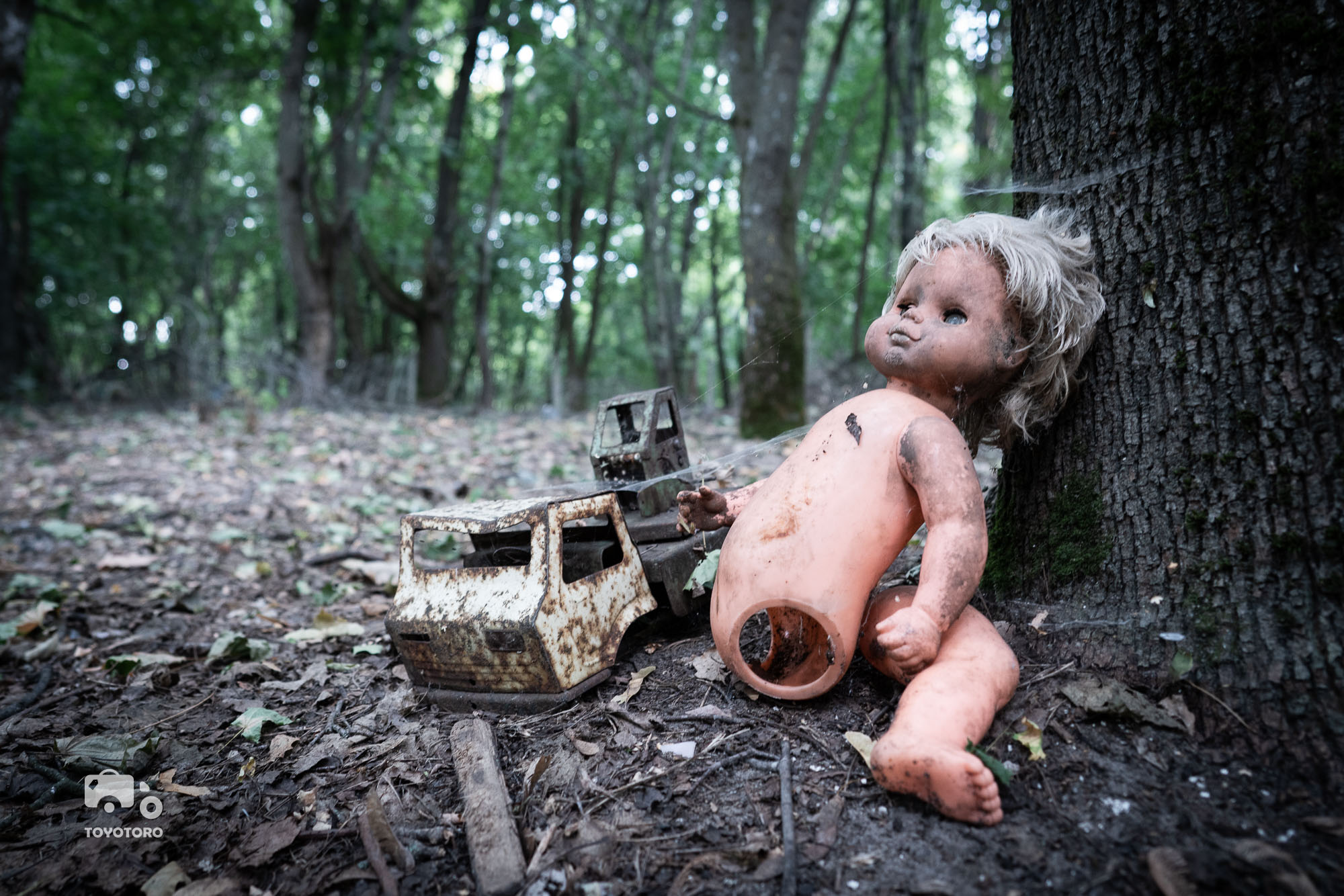 It was an early start and a two hours’ drive north of Kiev city. As we got closer to the danger zone the number on our Geiger-counter started to increase little by little. I was surprised to learn that there is a small community of a few hundred residents, mainly elderly, living in Pripyat because they did not want to leave their homes. However, we never went to these inhabited areas. What we saw was an unspoiled post-apocalyptic stage-set for shooting the next Resident Evil. I think I would not be surprised if a zombie-looking fellow started running towards me with their mouth open. Maybe my imagination is getting the better of me but I’ve never seen an entire town abandoned like this before.

What we saw was an unspoiled post-apocalyptic stage-set for shooting the next Resident Evil.

What used to be town centre, where people went to enjoy the cinema with friends, or grab a new dress from the mall or simply do some grocery shopping in the supermarket became hollow concrete shells overgrown with vegetation. I guess it’s nature’s way of taking back what is rightfully theirs. 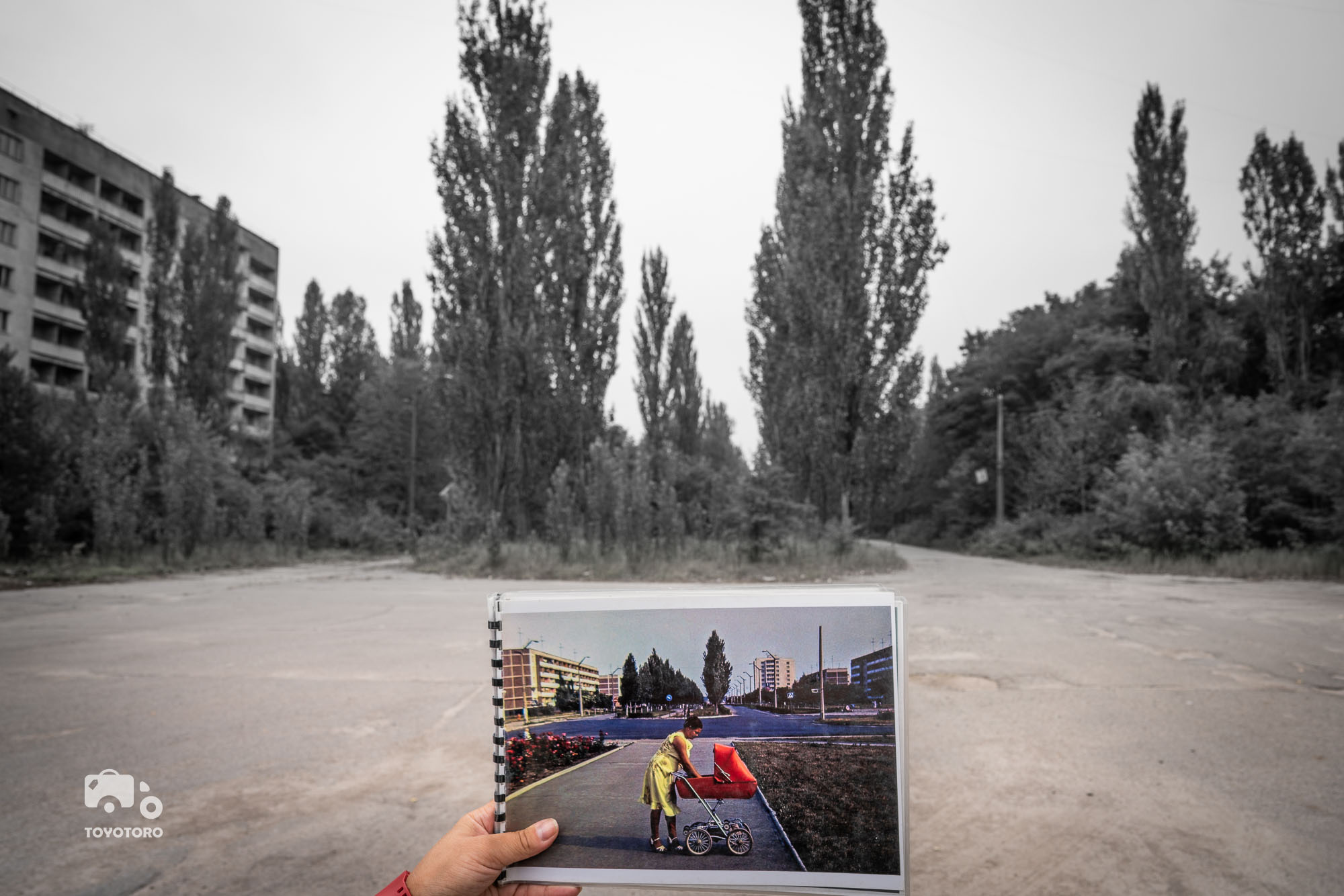 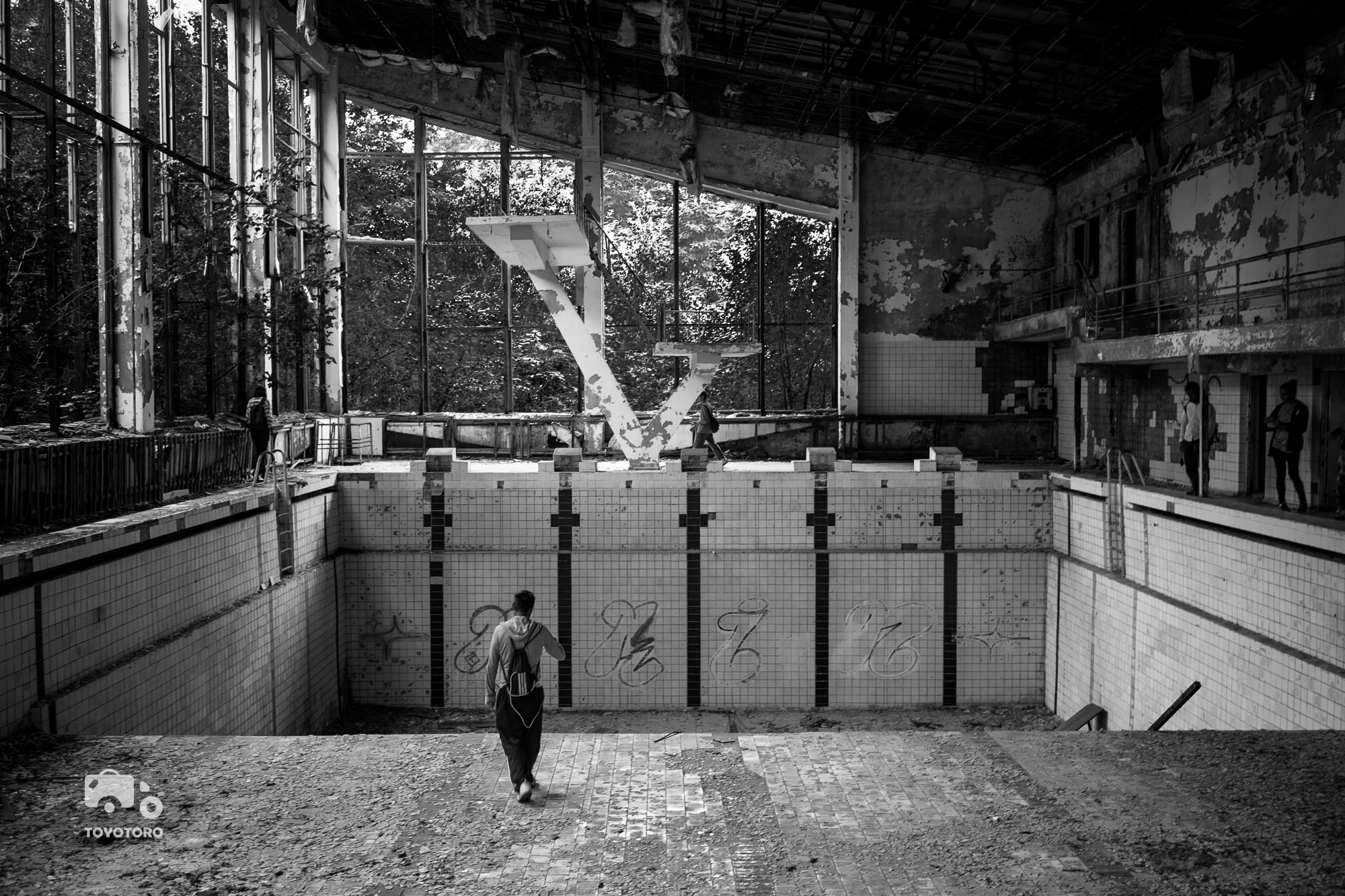 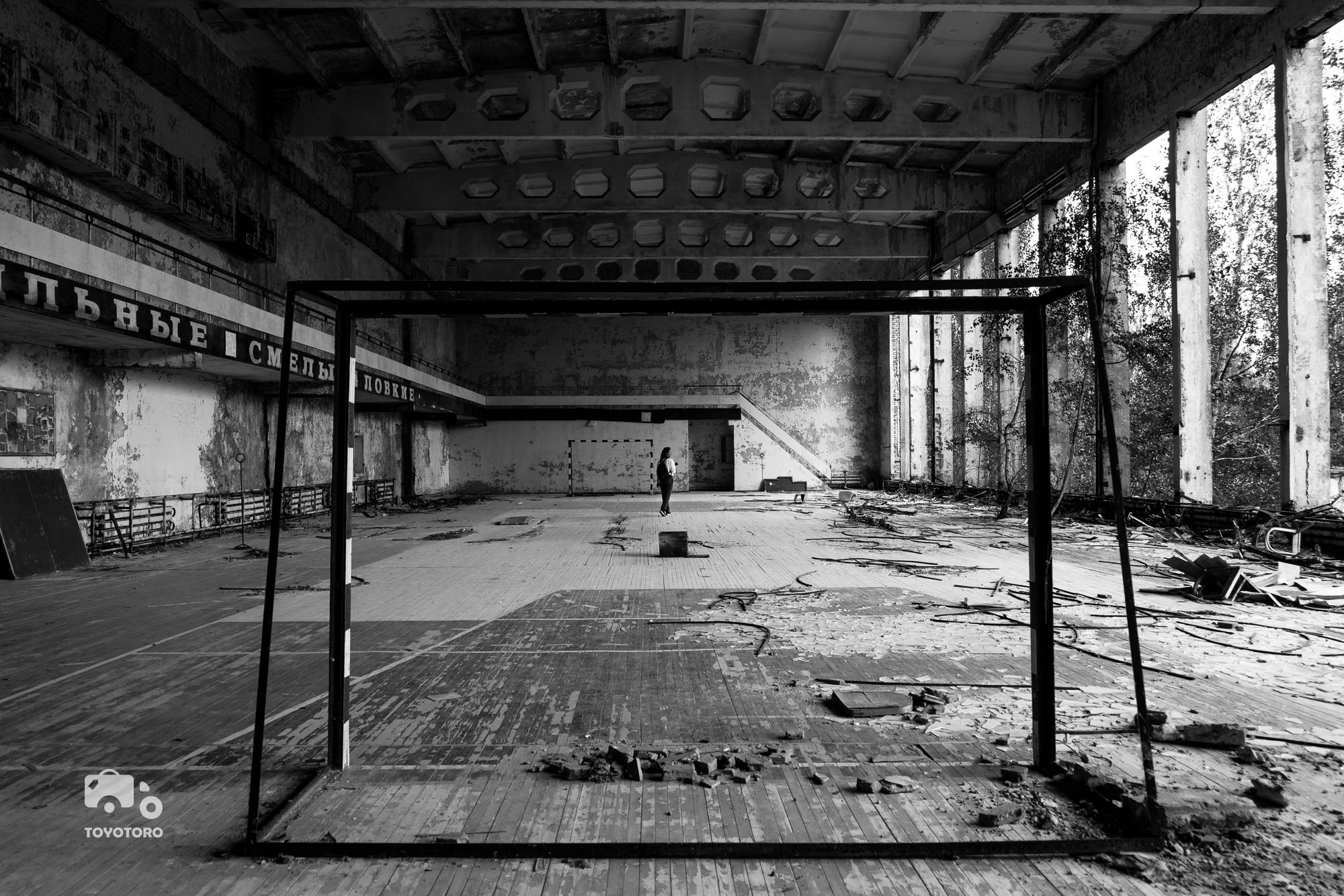 Out of all the derelict buildings, whether it be the nursery and school, football stadium, swimming pool or theme park, what strikes me the most was the sports hall, the twenty something storey high apartment building, and the terrific Duga-radar. Trees grew through the sports hall, where people would have enjoyed a game of basketball or football, is now nothing but material waste waiting for time to turn it into dust. The once inhabited apartment building filled with families of the workers from the nuclear power plant no longer gives shelter to the living. And the Duga-radar, that the Soviets used to detect missiles from the United States, and consequently tried to hide in the forest, is a piece of art. It is an orgasmic network of mesmerising geometry of which one can easily get lost in. What I am trying to say is, all that is left is a harrowing testimony to the many lives this incident has affected, in material form. 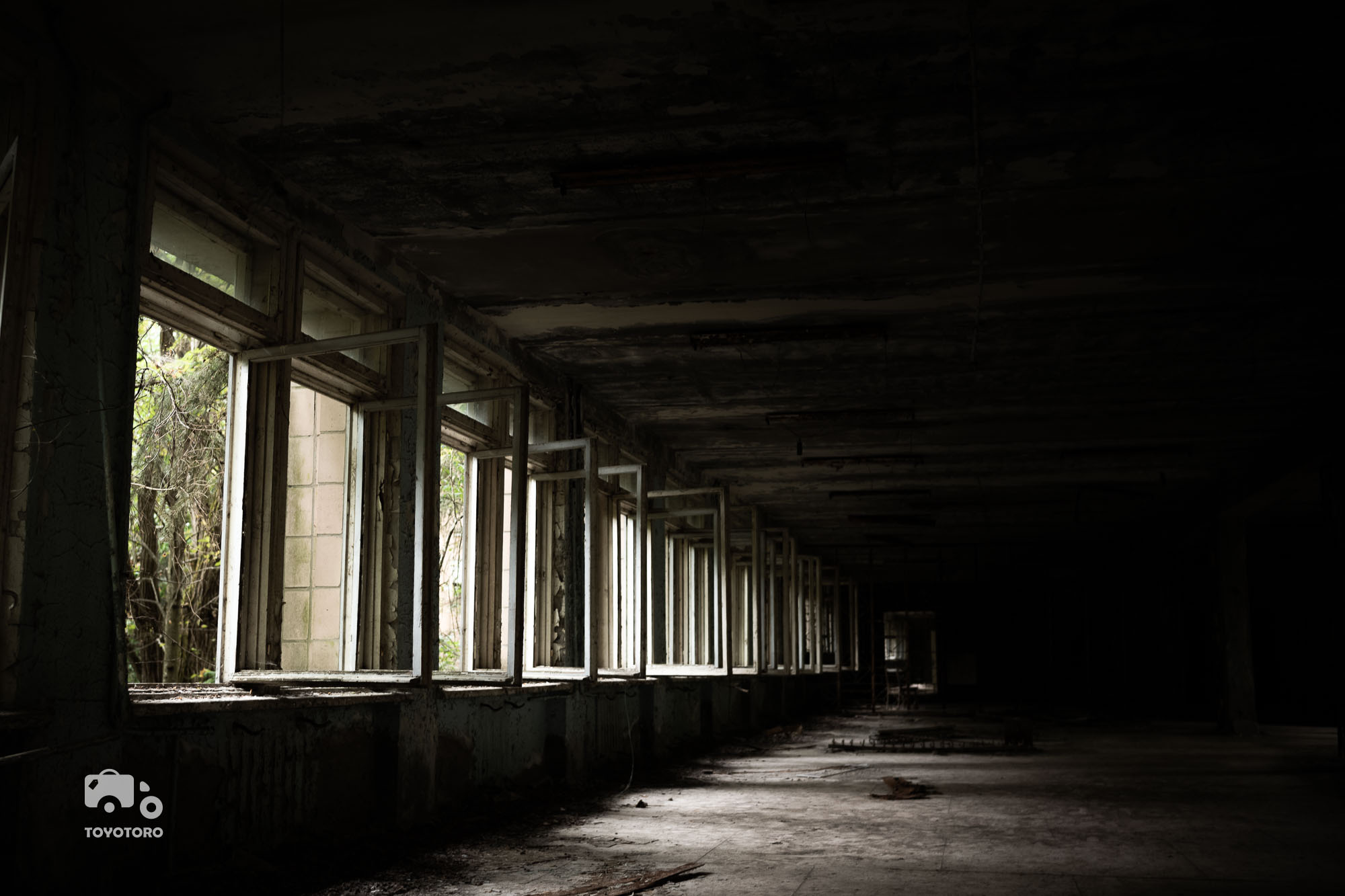 On the ride back to Kiev I am reminded of the chilling fact that we actually haven’t discovered an eternal storage for nuclear waste. The best scenario is it gets ‘safely’ buried somewhere in the earth or stored in the Rocky Mountains, like in the States, or tucked away in some unused mine like those in Germany and we cross our fingers and pray no natural disasters like an earthquake will disturb them. The radioactive particles will weaken and eventually disappear in years that run into six, seven digits. Allow me to be less abstract, the life span of the nuclear waste under Chernobyl’s concrete sarcophagus is 20,000 years and yet its own life-span is only 100 years. I am not good at maths, but maybe something is wrong here. Or we encore Chernobyl and Fukushima. I say why not. When else am I going to wear my pink hazmat suit?! 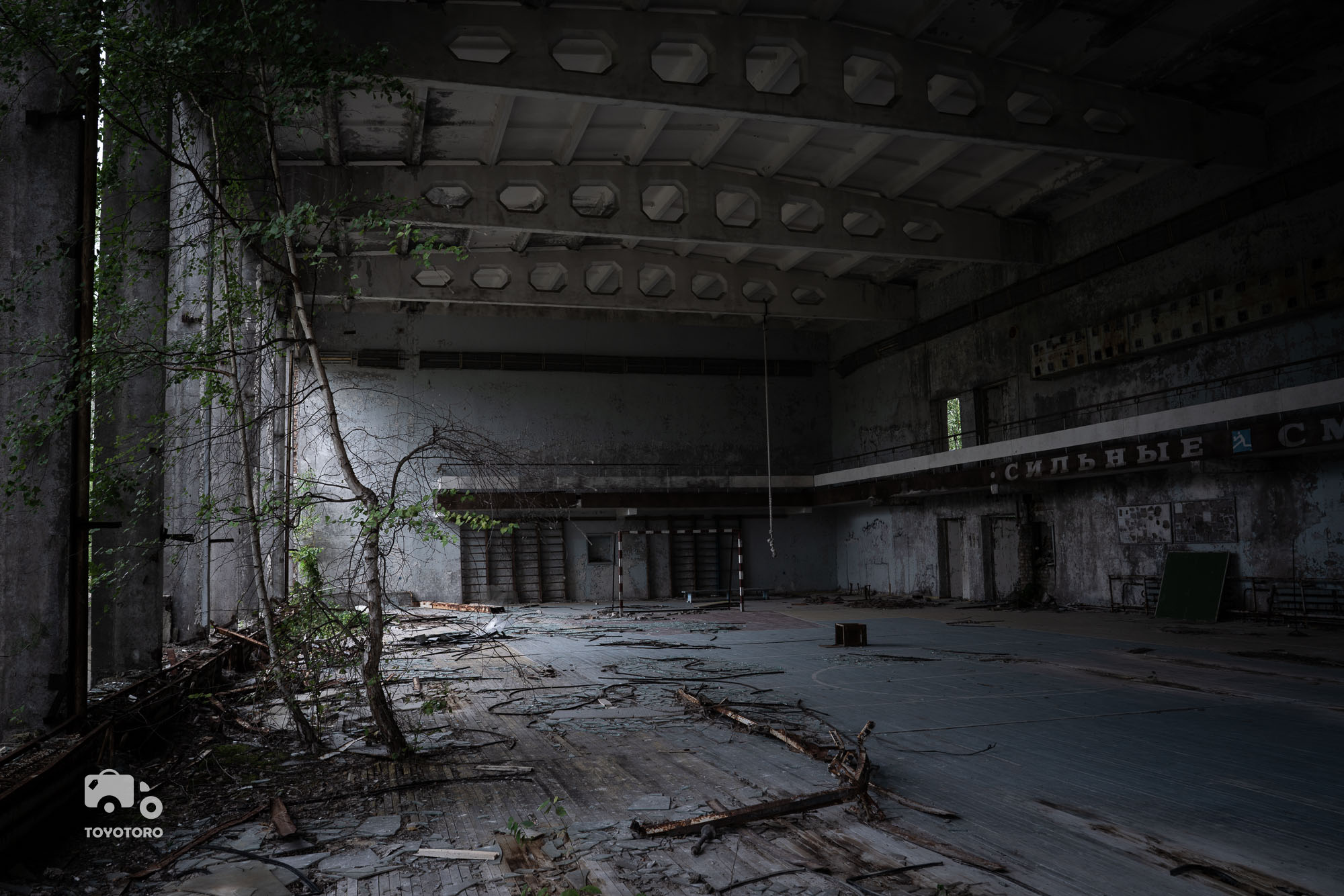