ToyoRoRo: Overlanding in Japan with our German 4×4

How we successfully shipped our German-licenced car into Japan

First and foremost, we successfully drove in Japan for 4 months with our German-licenced car.

According to Japan Automobile Federation (JAF) this should be impossible:

If a temporarily imported vehicle is registered in a country that is not a party to the aforementioned treaty (as it were, Germany, Switzerland, Monaco Slovenia), it must be inspected and registered in Japan on arrival, even if imported under cover of CPD.

As far as we know this ‘inspection’ and ‘registration’ cost a lot of money and time. In addition, you needed the help of a Japanese resident. Therefore, it was not an option for us to do it the ‘proper way’.

The key to entering Japan with a German-licensed vehicle, avoiding this proper process, is knowing with assurance, that each organisation, be it JAF, customs agents or shipping agents, are separated. Each party focuses on their own tasks and do not operate outside of it. Additionally, most policemen and -women are seemingly not aware of the treaty-issue.

Our sequence of procedure from China to Japan

Which port in Japan?

We read a lot on the internet regarding German/Slovenian/Monacan vehicles entering Japan with most saying it is impossible. But every now and then we read stories about those who just went for it and made it. This gave us hope to gamble and it paid off.

After some consideration we chose Tomakomai (苫小牧) in Hokkaido for the following reasons:

We came in highcube container from Tianjin. No choice for RoRo coming from China. 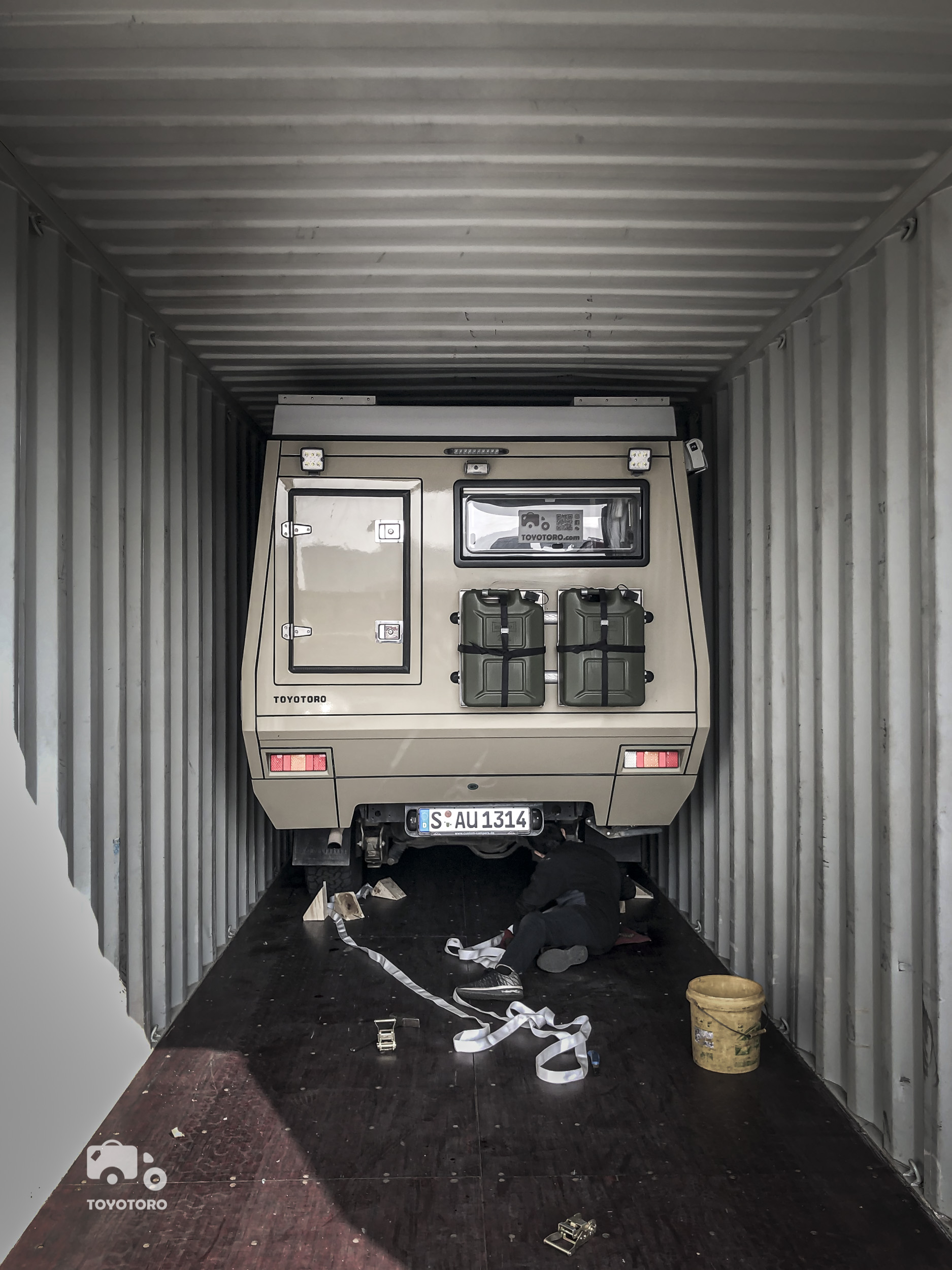 Getting our car out of China was not a problem as there are numerous freight companies that leave China and from the port of your choosing. The Japanese side is more troublesome. We also privately contacted a few and all, but they all came back saying they could not receive our vehicle for various trivial and frustrating reasons.

Sunrise Logistics Company Limited does not have an agent in Tomakomai so they had to use another local company called Narasaki-Stax (ナラサキスタックス株式会社). Both very competent companies who managed our car professionally (though Sunrise Logistics needed a bit chasing up at times). The agent from Narasaki-Stax was essential for us because he is the one doing the paperwork and our gateway to the local customs guys, who can authorise the clearance of our car from the shipping yard. If we chose larger ports to come into Japan e.g. Tokyo, Yokohama or Osaka etc., then we probably would not have needed Narasaki-Stax and cut on the extra costs. A Dutch couple we met in Japan went with RoRo into Yokohama and they did the customs clearance by themselves.

Important to note when giving information to the Japanese shipping company

One lesson to take away from this whole process is to provide the Japanese shipping company with:

I am emphasising this because due to some mis-communication between the Chinese and Japanese side we did not provide such a list to the Japanese side nor to the customs guy when we landed in Osaka (on our customs slip it only says “1 car” which proved to be a major problem because apparently this doesn’t include all the stuff in the car). This resulted in an extra week of waiting around, organising an inspection, while hunting down different customs guys (one that took care of the car and one of its content, and no, they are not the same people) to explain to them there’s nothing dangerous, just old rags and used goods in our car.

NB: It is advisable to avoid items like “petrol stove”, “chemical toilet liquid”, “oil”, “dry food” or “cooking ingredients” in the list as it will backfire when you ship out and the RoRo company will force you to remove them.

In the end we managed to avoid the more extensive inspection (but still have to pay 400 USD) and the ‘declaration of personal effects’ cost (200 USD) and transportation cost (60 USD) from terminal to inspection yard. The inspection itself was quite a funny affair and frankly a bit of a joke for the money you pay for it. It lasted no more than 30 minutes and it involved 4 inspectors, a supervisor, our agent and 3 of his workers. It looked like a group of Minions with their little helmets playing with a new big toy they just found.

We don’t know if by providing the list would mean we’d avoid the inspection. But speaking to the local agent and two customs guys, it seems like it would definitely have sped up the process of getting the car on the road. What other process that would’ve popped up instead of the inspection, I hope, we don’t have the privilege to find out.

Condition of car before shipping to Japan

The Chinese shipping company informed us as long as the car is not too dirty then it’s ok to ship. They also said we should dispose our gas cylinder. We conveniently did not follow up on that advise and all was well.

In the end we just washed the outside of the car and gave the inside a tidying-up (clothes and things stored away etc.). When it arrived in Japan there was no mention of the car’s exterior nor interior condition.

While in Japan, waiting for the car to arrive…

Jibaiseki = mandatory and very basic car insurance. Not recommended to just use Jibaiseki coverage, we are covered by our worldwide car insurance, please check if you need to obtain additional coverage for Japan.

As we waited for our car to arrive at the port we went Jibaiseki hunting. Technically this job should be the task of the receiving end of the container, so our Japanese counterpart but since they never received a vehicle before in Tomakomai we had to do the leg work. We read online that it was easy. You just walk into any dealer and they’ll issue it to you with your VIN number. This definitely was not the case with us.

We went to a few car dealers in Sapporo, mainly around JAF (where they issued our Carnet authentication) and an insurance company. That strip of road outside JAF is full of car dealers and service centres. They all wanted MOT or Shaken (車検) and it didn’t seem to matter which country our car is from. But mostly we got the impression they didn’t know what to do when dealing with an anomaly such as ourselves.

We eventually went to a company called Sompo Japan Nipponkoa  (損保ジャパン日本興亜) that specifically deals with damage insurance a.k.a. Jibaiseki. After some explaining (in Japanese) a lady sold it to us and that was because she found in her Jibaiseki handbook that they can sell it to foreigners without a Japanese licence and no proof of shaken/MOT needed. Most importantly the handbook didn’t mention it was not possible for German/Slovanian/Monaco licenced vehicles.

Deal maker for getting Jibaiseki:

Dealing with JAF was pretty straightforward even though we confused them at the beginning. We didn’t know which port to best come into Japan so at the time we told JAF (in the e-mail we attached a copy of a) Carnet copy and b) drivers’ licence copy) we’d be coming into Fukuoka, so they gave us the contact info of that branch. Two weeks before our car arrived we informed them the car is actually going to be in Hokkaido. They were surprised but was efficient in sending our info to JAF Sapporo branch.

Before we went to the JAF Sapporo branch we made sure to call the lady, with whom we’d been in contact with, to book a date and time in which we could pick up our Carnet authentication document. When we arrived, we picked it up free of charge. We asked her to translate Henning’s German driver’s licence into Japanese, which she did for a fee of 3000 yen and it took her only a few minutes. As for my UK driver’s licence she didn’t know what to do so we left it.

NB. According to GOV.UK the International Driving Permit (IDP) is sufficient for UK-citizens to drive in Japan since it’s based on Geneva Convention on Road Traffic of September 19, 1949 (while the German IDP is based on the 1968’s convention which Japan has apparently not ratified). Therefore, no translation necessary for the UK licence.

Encounters with the Japanese police

During our four-month trip we covered all four main islands: Hokkaido, Honshu, Kyushu and Shikoku. We’ve had four encounters with the police. Two in Honshu and two in Kyushu. The first was the longest. We parked somewhere where we shouldn’t have, and our mistake cost us two hours of back-and-forth explanation with four policemen who didn’t really know what to do but at the same time were reluctant to let us go (they even called JAF but luckily didn’t get through to the right person responsible). In the end we let them take photos of our car and all our documents, so they can ‘study’ this case because it’s their first time meeting a foreign number plate. The other three times were short encounters that mainly involved showing them we are not bad people and we have the relevant documents e.g. showing passport and Jibaiseki.

The general feeling we got from the encounters are:

We left Japan for Malaysia on the RoRo service (half the price of container). After inquiring with different shipping companies, we settled for AutoHub Japan based in Osaka, who gave us the best quote in Japanese Yen (including tax):

NB: make sure to include actual vehicle’s dimension in quote request since RoRo cost are volume-based

The checking procedure of AutoHub as follows:

Yoroshiku onegaishimasuuu!  – Japan, it’s been a blast.
The Journey

Back to the Bear Necessities
Close Panel